Long live the Shiretoku Goko Lakes and the 300 square metre Movement! Ongoing fund raising for more tree planting activities at the Fukushima shores – also from you?
Thanks to some previous Cycle Generation donations we could support another well worthy forest conservation project. This time for the large area around the Shiretoku Goko 5 Lakes.
Since the 70s people from the surroundings of Shari town have been buying back land previously used for agriculture (the 100 square meter movement). They said to prevent “rampant development”. Big efforts in tree planting and forest conservation brought back especially the big native animals. 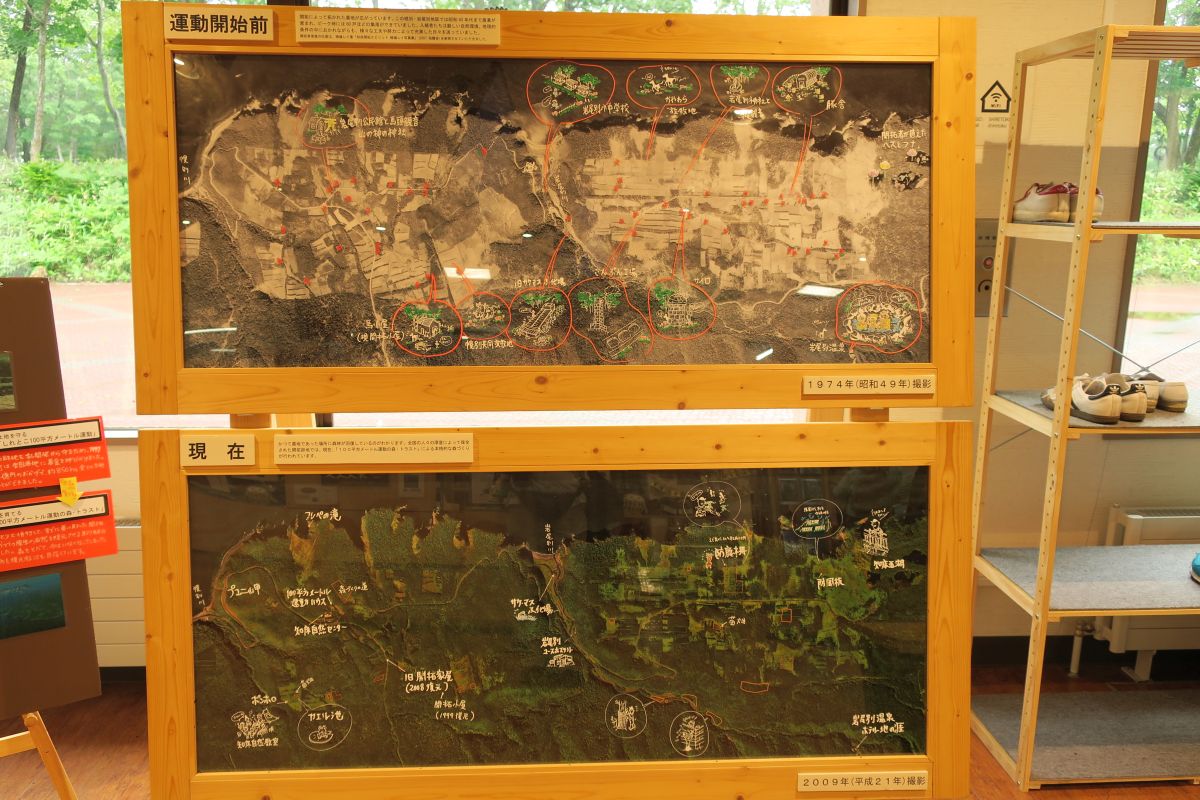 100 square metre Movement reforestation – Before and After

Our donations will support the Trust’s activities in further tree planting and forest conservation.

We cycled on a beautifully sunny day (rare in this region!) through hilly terrain towards the Goko Lakes, admiring the breathtaking view of the Shiretoku mountain range – and also the fresh droppings from a Hokkaido Brown Bear (called by the Ainu – Hokkaido minority – “Mountain Deity”). 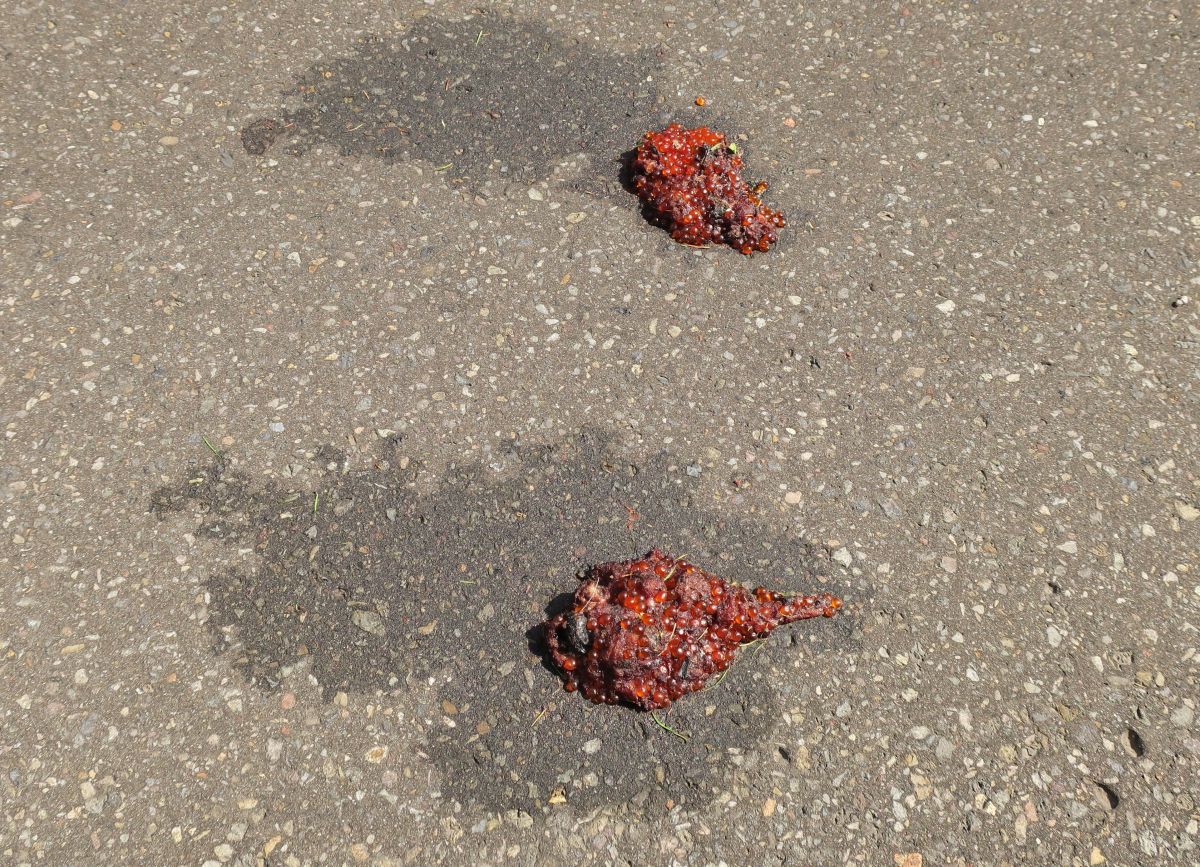 On the picture you can still recognise its salmon diet from the undigested fish eggs. The Hokkaido Brown Bear is closely related to the Grizzly Bear and unlike the Japanese Black Bear pretty big. Within the next few days we could observe both a fishing bear as well as a river full of salmon ready for spawning. 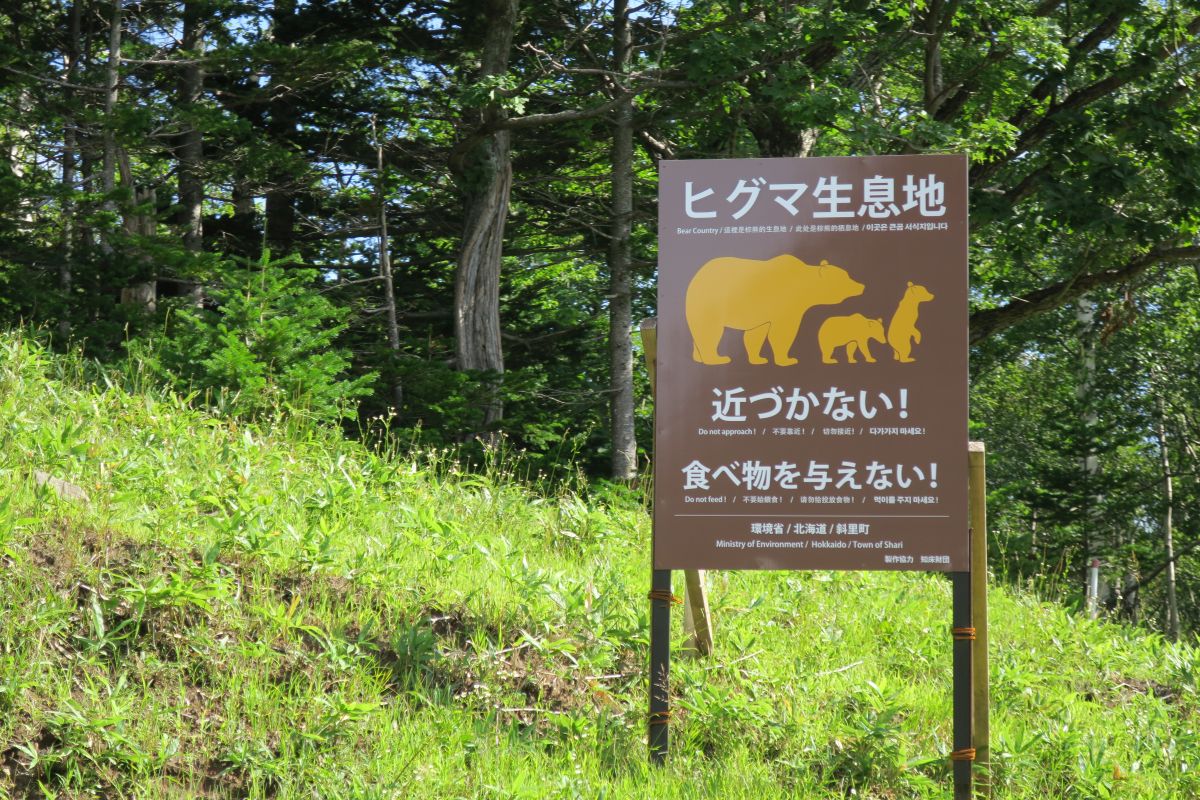 While sitting on the front seat of Amirams bicycle, Amaya kept vigourously ringing our bear bell to inform any nearby bear of our rather silent bicycle approach. Tayanika did her part in singing along to Chinese songs from our Singapore preschool music mix. 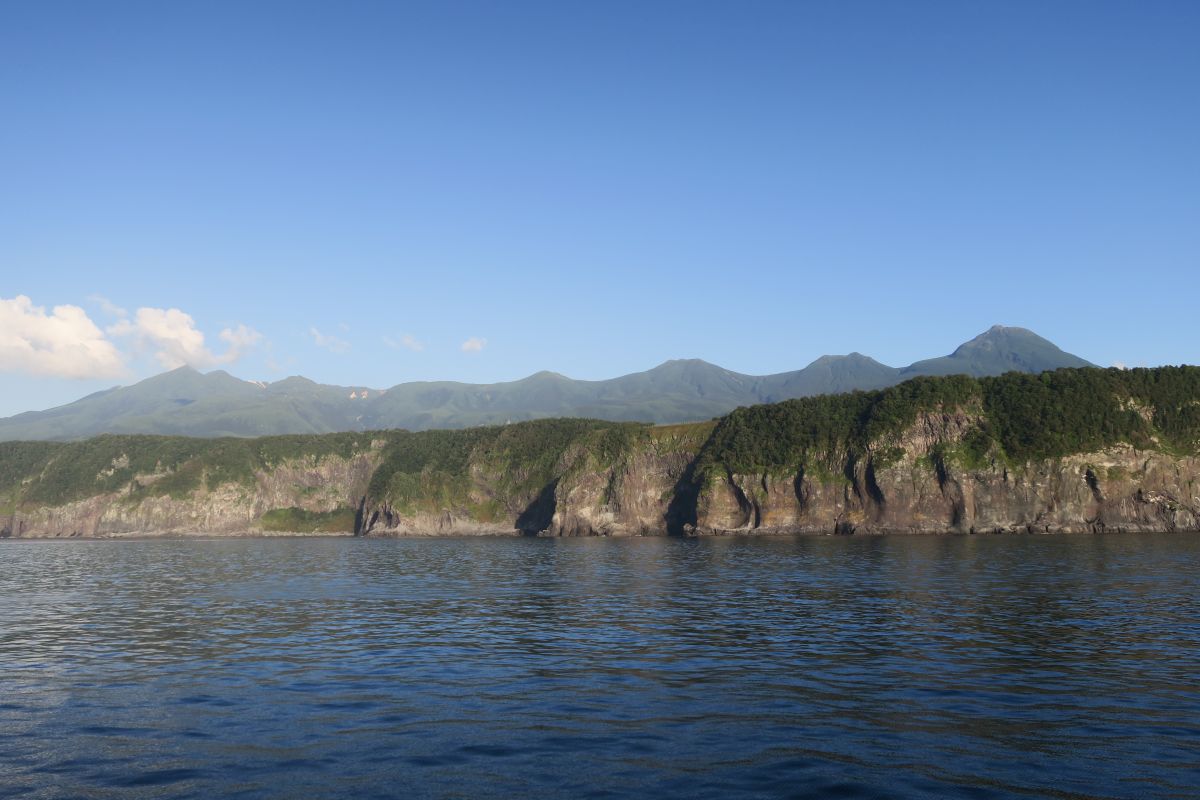 The beautiful landscape of the 100 m2 movement sits below the impressive Shiretoku mountain range on top of a high cliff above the Okhotsk Sea. The World Heritage Site of the Shiretoku National Park is also home to the very rare Blackinston Fish Eagle Owl (called by the Ainu “Village Guardian”), the impressive Stellars Sea Eagle, and many different types of whales, such as the Orca (called by the Ainu “offshore deity”). Few days later we were lucky to spot even some sperm whales off the coast taking a deep breath before diving deep down into the ocean to maybe catch an octopus for lunch. 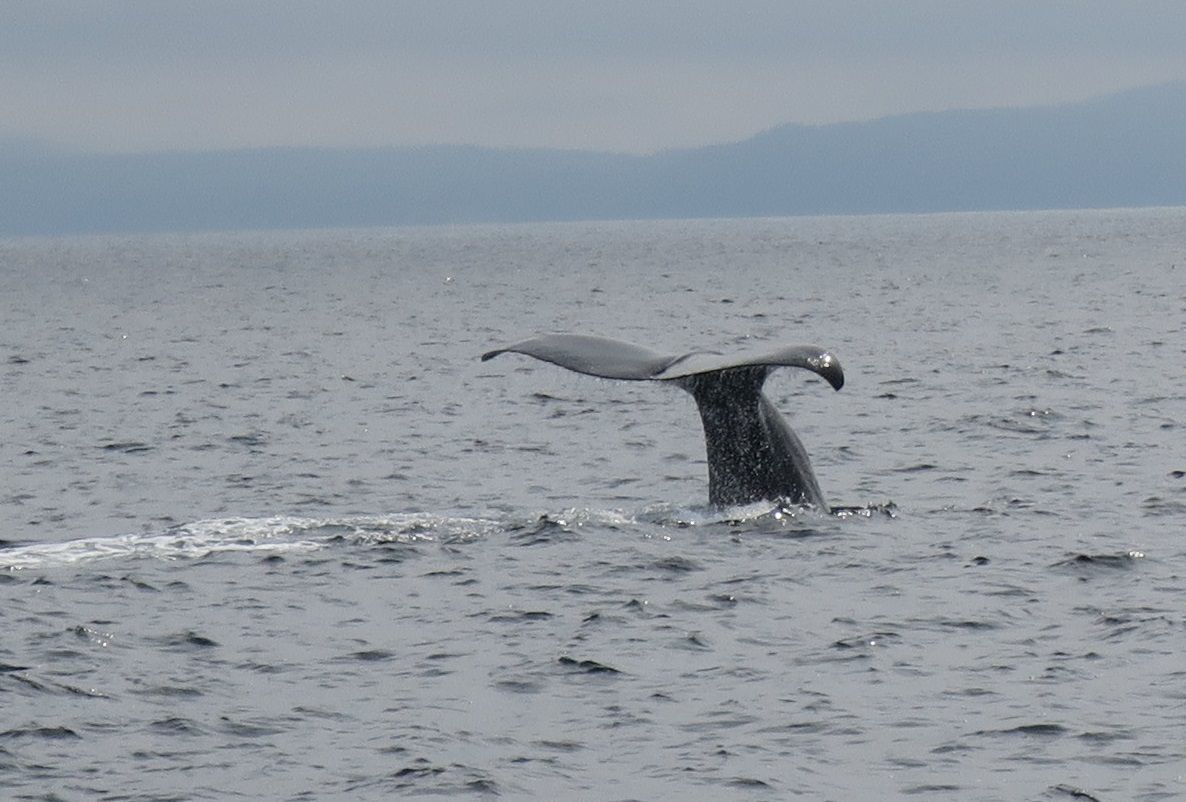 This impressive fauna is a gift brought by the winter drift ice in the Okhotsk Sea. The drift ice brings plankton that is the starting point for the whole food chain that (still) feeds animals and humans (who are not vegetarian of course).

Our hilly cycle ride was accompanied by many Hokkaido Sikka deer jumping over the road as well as supportive “Gambatte” calls (Japanese for “Keep it up”) from other travelers. 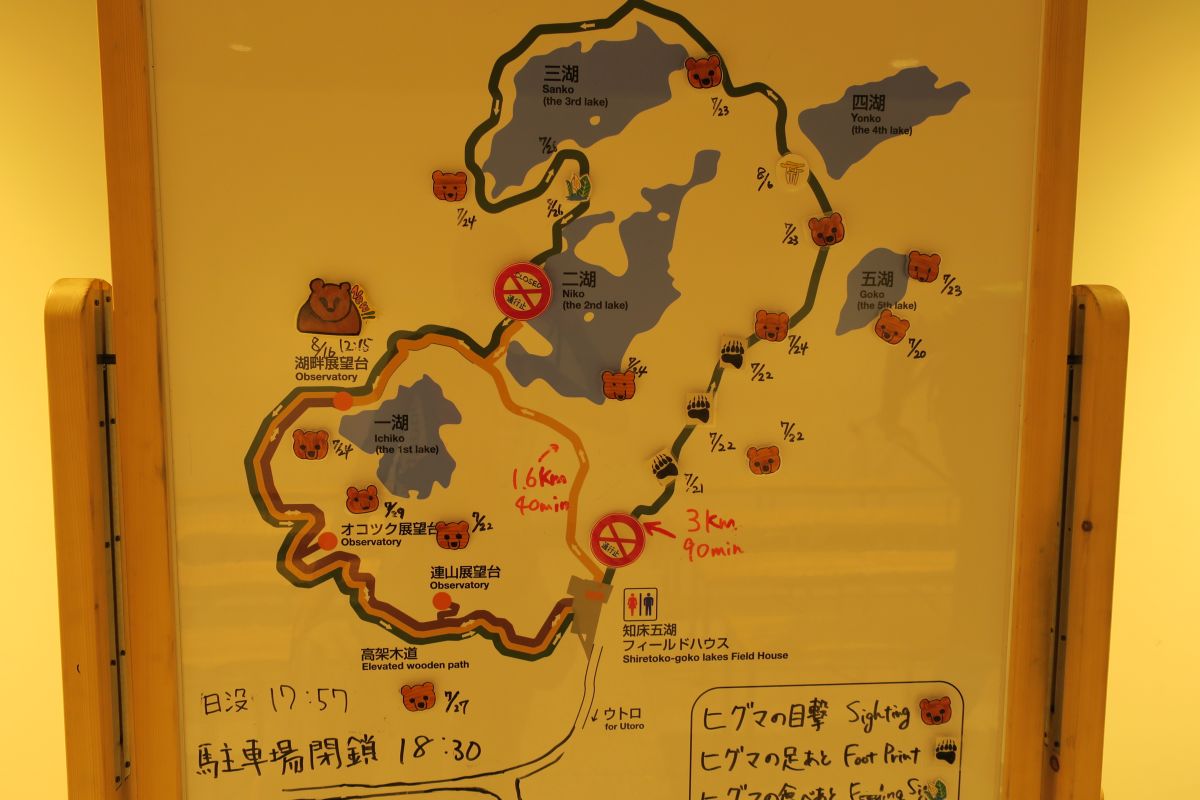 After having attended our Bear Lecture and seeing the latest Bear sightings Map, we took the “Kiotsukete” (Japanese for “be careful” or “safe travels”) a lot more seriously. Clearly this was the wild side of Japan and we were loving it. The next day, after a grueling climb up Shiretoku pass and thick, wet fog awaiting us on the other side of the mountain we thoroughly enjoyed the wild outdoor onsen (called the Bear Onsen) next to our campsite nestled within lush green primary forest. 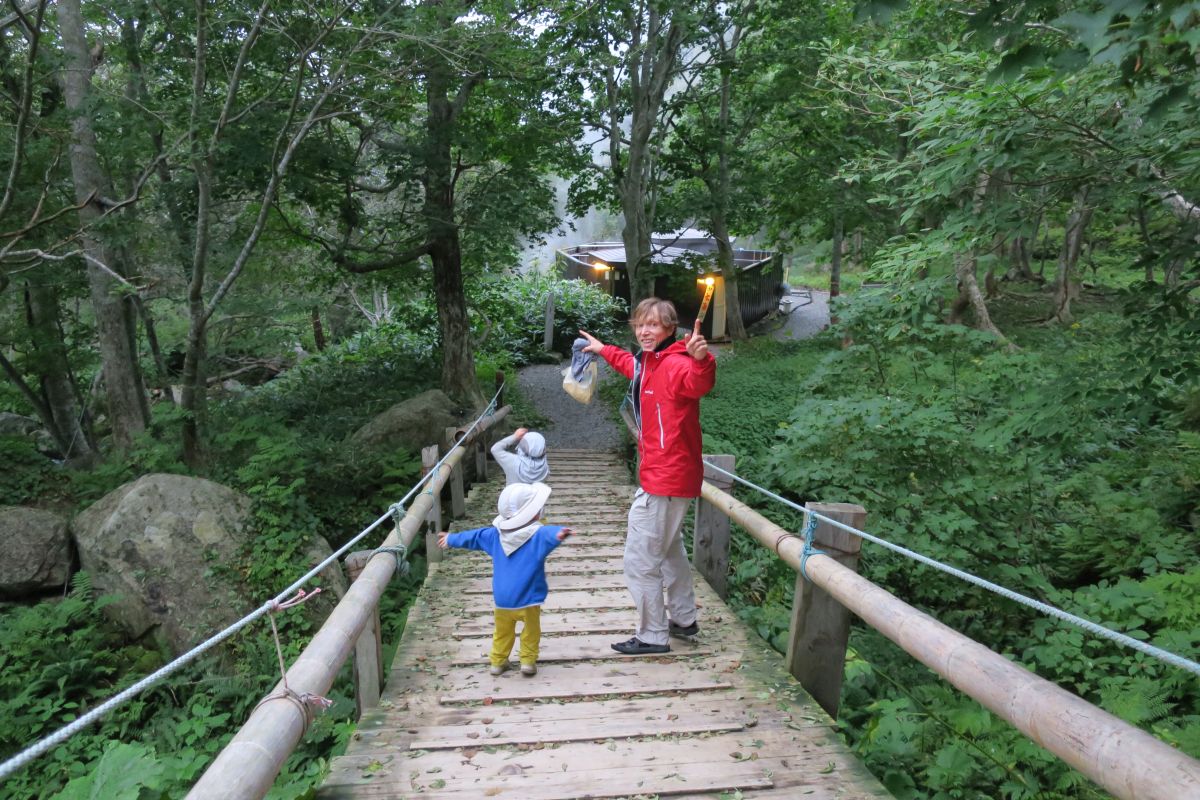 While we were sitting in hot, brownish water surrounded by a mixture of hot steam smelling of old eggs (sulphuric) and cool fog, the raccoon “marked” its territory on our cuttlerie that I had laid out for drying near the tent…. Wild Japan at its best;-)