The Pixies of the Cloud Forest – chapter 1 only

Author: Ragna with my daughters Amaya and Tayanika      Illustrator: Tayanika
Fantasy for children with bits based on a true story
The Cloud Forest of the Pixies exists in reality and you can help to expand it further, by donating here!
********************************************
CHAPTER 1
Once there lived a community of pixies deep in the cloud forest under the curling roots of a majestic fig tree close to the tallest mountain of Fairyland. The fig tree was partially hollow inside and provided ample room for everyone. The children’s school was just next to it in a five meter tall tree fern and a highland palm tree on the other side hosted the community’s arts workshop. At night the trees and plants whispered them their centuries’ old wisdom and wrapped them in their safe shadows, while the rivers and creeks sang a lulling good-night song.

The pixies wore clothing made of fern and heliconia flowers, had spiky long ears and slim slender bodies. They always walked barefoot for their bodies were so light that their feet barely touched the ground. They were kind-hearted and only seldom were they a little short-tempered. They sometimes liked to play tricks on each other, as pixies do. But to make it up they would quickly take a fresh bamboo shoot, tap a teeny bit into the the sap of a tree and offered it to each other. They could get quite grumpy when things did not turn out the way they wanted, but as they lived in peace and harmony with the animals and the plants of the cloud forest this rarely happened.

In the dry season the pixies enjoyed refreshing baths in the pools between the rocks of the mountain river, in the rainy season they daringly jumped down gushing waterfalls. They giggled even when it was cold in the water as pixies never get a cold. When they were hungry they harvested wild fruits and mushrooms that grew in abundance everywhere. Nearby wild bees shared nectar or they hitched a ride on the back of a quirky kolibri (in English: hummingbird) to the nearest flower to tap into the sweet drink themselves. Or their friends grandpa squirrel and mama opossum scurried off to bring them a crunchy nut. The air was always filled with laughter and happiness.

In the mornings they would climb high into the flowering canopy to exchange jokes with their feathery friend the quetzal. During midday they played hide-and-seek with their curious neighbours, the coatis. At bedtime they would not forget to say goodnight to baby piglet and the forgetful great aunt tapir. At night they danced wildly swinging on tails of moss that were hanging down from weathered branches and intertwined vines. The ghostly moths and night bugs graciously flew loops around them. Their singing echoed in the forest till dawn.

They welcomed every rainfall. The gentle drizzle left sparkling raindrops and during the plundering heavy storms their friends the rain fairies performed their wildest dances. Then they waved good-bye to them for a long time and the tired magic creatures swayed off on the rain drop beds in the clouds.

Sheltered under the old fig tree they hardly felt when the naughty white-face-capuchin monkeys would throw down fruits from the trees. They would just creep under the nearest mushroom to keep safe from the monkey’s tempers and wait quietly until they had passed.

The wise old jaguar visited them once a month during the full moon and brought them messages from their neighbours north and south of Fairyland. With her deep voice she would read letters from the elves and the dwarves, sometimes even from the gnomes who live far south over the canal. When the clouds were hanging too thickly on the valleys and the mountain slopes, the glowworms would illuminate the magic script of their friends.

If you liked this chapter and would like to find out how the pixies of the cloud forest managed to save their valley in the mountains with the help of their fairy and animal friends and a little human girl called Maja, send us a quick message and we will give you access to the full story!

The Cloud Forest of the Pixies exists in reality and you can help to expand it further, by donating here! 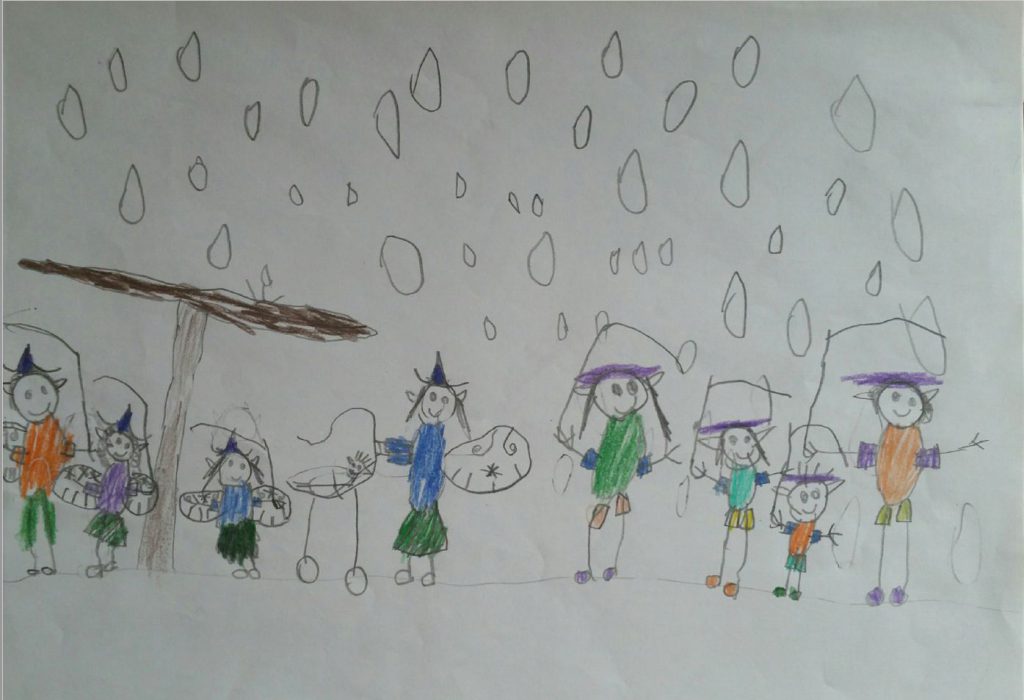