How to – Camping in Japan – Hidden treasures

Japan is known for many things: Sushi, Samurai, Ninja and being a world apart, but it is not widely regarded as a great camping destination. However any overland traveller that loves the outdoors or is on a budget will find out that Japan is probably one of the best destinations for camping especially in Hokkaido and Shikoku. Another special feature is camping wild/free, which is a super great feature and sets Japan apart from many other countries such as New Zealand for example where heavy fines are in store for the pitiful free camper. 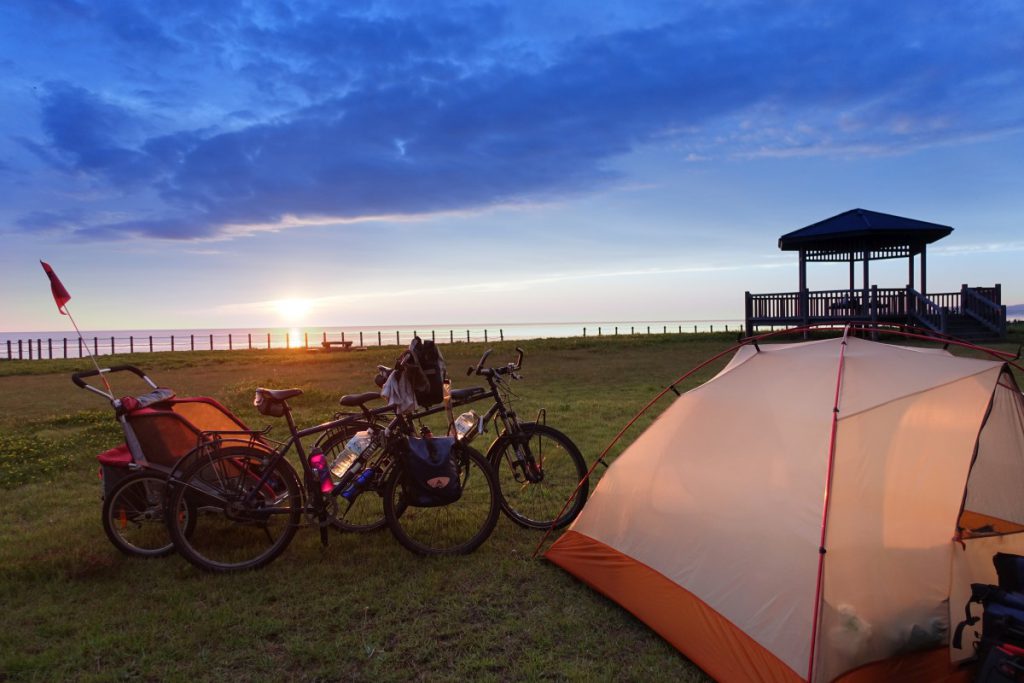 There are designated and maintained free campsites, sometimes within city parks or along the coast. In fact, it is possible to camp in almost any area. We camped at beautiful beaches, lakes, rivers and often had the place to ourselves. Or we camped free within city parks, playgrounds or near rivers. Locals recommend some of these spots to us.

On none of our previous cycle tours in Asia, Africa or even Europe did we camp so often. In addition to great camping, comes that almost every town has a public bath or hotspring.

The one thing to reckon with in Japan however is rain, sometimes lots of it for extended periods. So weather planning is important. Watch some films that feature Japan and you will realise that rain in Summer and Autumn is always featured (Seven Samurai, Memoirs of a Geisha, The Last Samurai etc.). In late Summer and Autumn Typhoons need to be taken into account and then it’s better to go indoors or into cabins.

A summary about camping in Japan

1) Believe it or not there are official free campsites. Its not only free but they have running drinking water and toilets that even have toilet paper and very regular cleaning. Campsites are often in parks especially in medium sized cities. A list of camp sites that we stayed at, including free ones, are listed at the end of this page with comments. 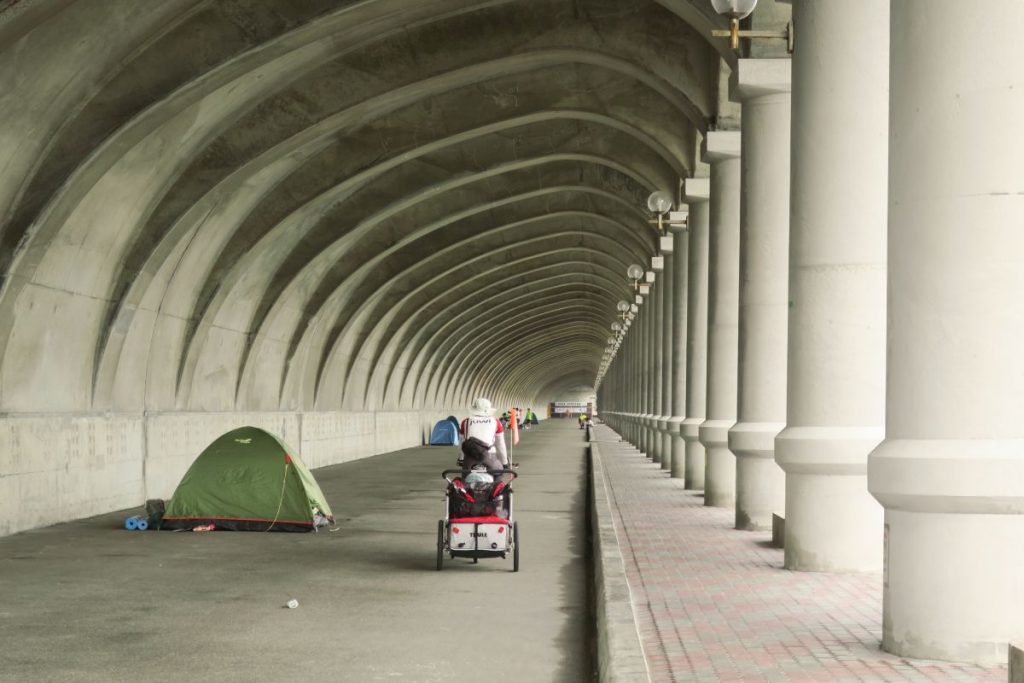 2) Campsites in Japan and especially Hokkaido are often located in the most beautiful spots, on lakeshores, beside wild onzen (natural hotsprings), at beautiful beaches, peninsulas and so on.

3) Camping free/wild is safe and possible and in our opinion one of the great things about Japan. As long as no one is disturbed by your presence, you are in a public space, and the site is left as spotless as before, it’s possible to camp in many locations. This was essential for us because as cycle travellers, especially with children, one ends up often in remote and odd places, sometimes late and without official campsites or other accommodation options. 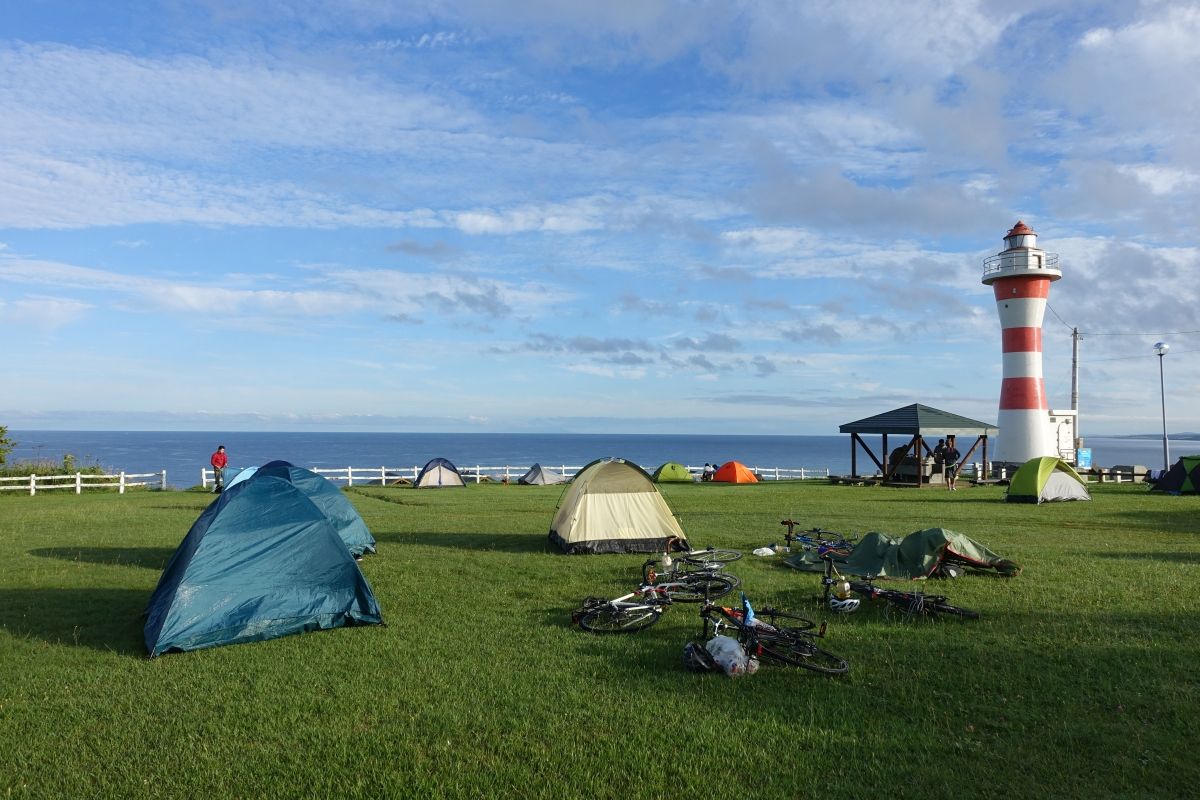 4) Wild camping is best along rivers, in parks, besides Michi No Eki (Japanese road station, and then on the carpark for example), playgrounds etc. Other travellers also report regularly about camping near shrines or temples. Again our recommendation would be: As long as you stay for a night only, do not disturb people, are considerate and discreet, leave no trash, almost every secluded public space could become your place for the night. Japanese people are very polite and would leave even a wild camper in a park in the early morning to himself. 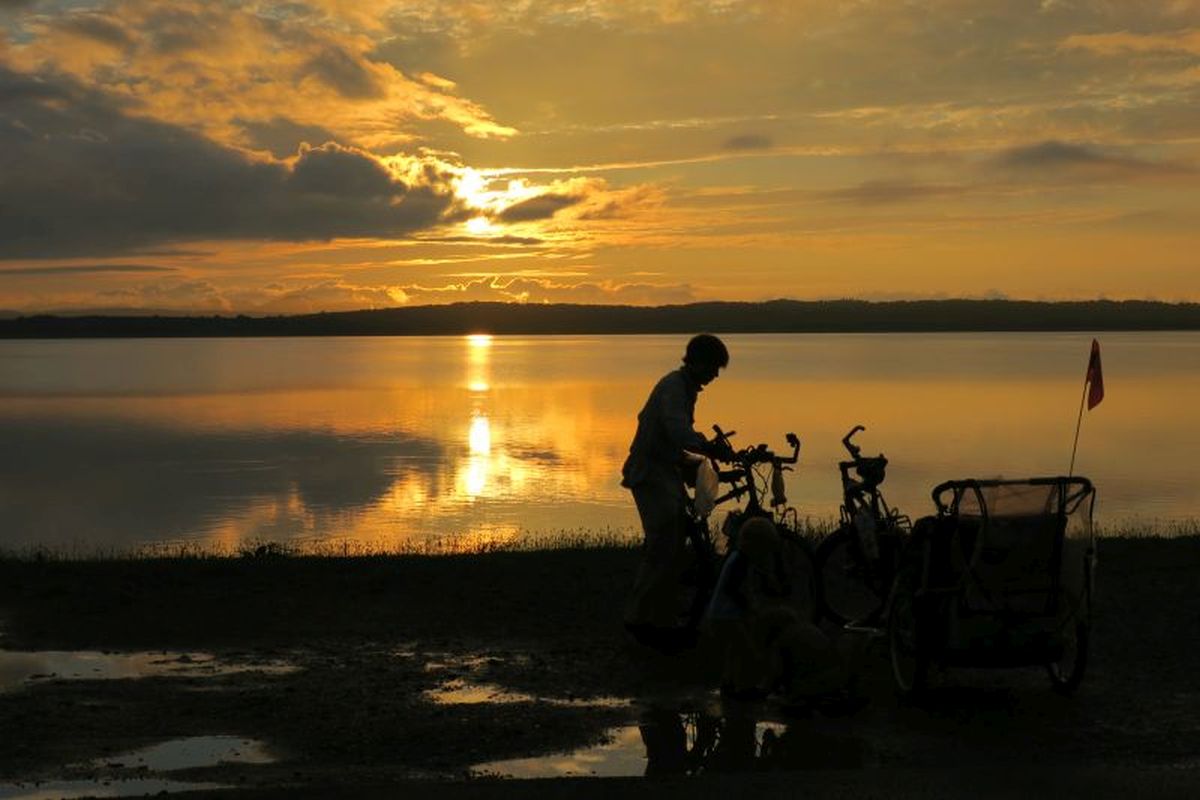 5) Hokkaido (the northern Japanese Island) is not only an outdoor and cyclist’s Mekka but also a camper’s heaven. In Spring, summer and often Autumn (May to at least September) there are campsites almost every 20 to 30km. Campsites vary from free campsites and over minimal priced omes for 100 Yen per person to high end spots for above 1000 JPY. 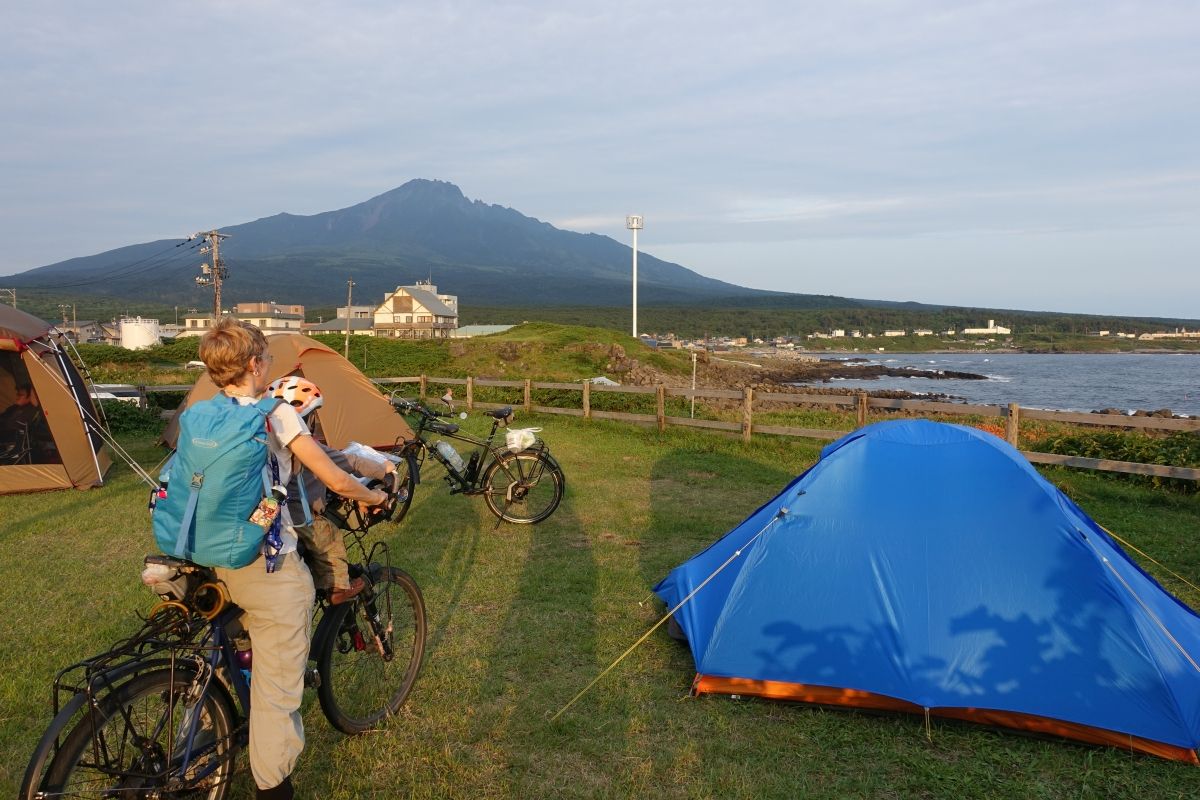 5.1) Campsites in Hokkaido are often near or beside Onzen (hotsprings). This is an amazing setting especially for cyclists thoroughly soak one’s tired muscles. We loved it and called it “Onzen camping”. This turns your Hokkaido cycle tour into an outdoor Spa tour. In other areas almost every town has public hot baths and there are many many onzen all over Japan.

6) Often there is no shower at campsites. This is because of the availability of public hot baths.

7) Some campsites are called Auto campsites. These are normally larger with more facilities, space for cars beside tents and a bit more expensive. 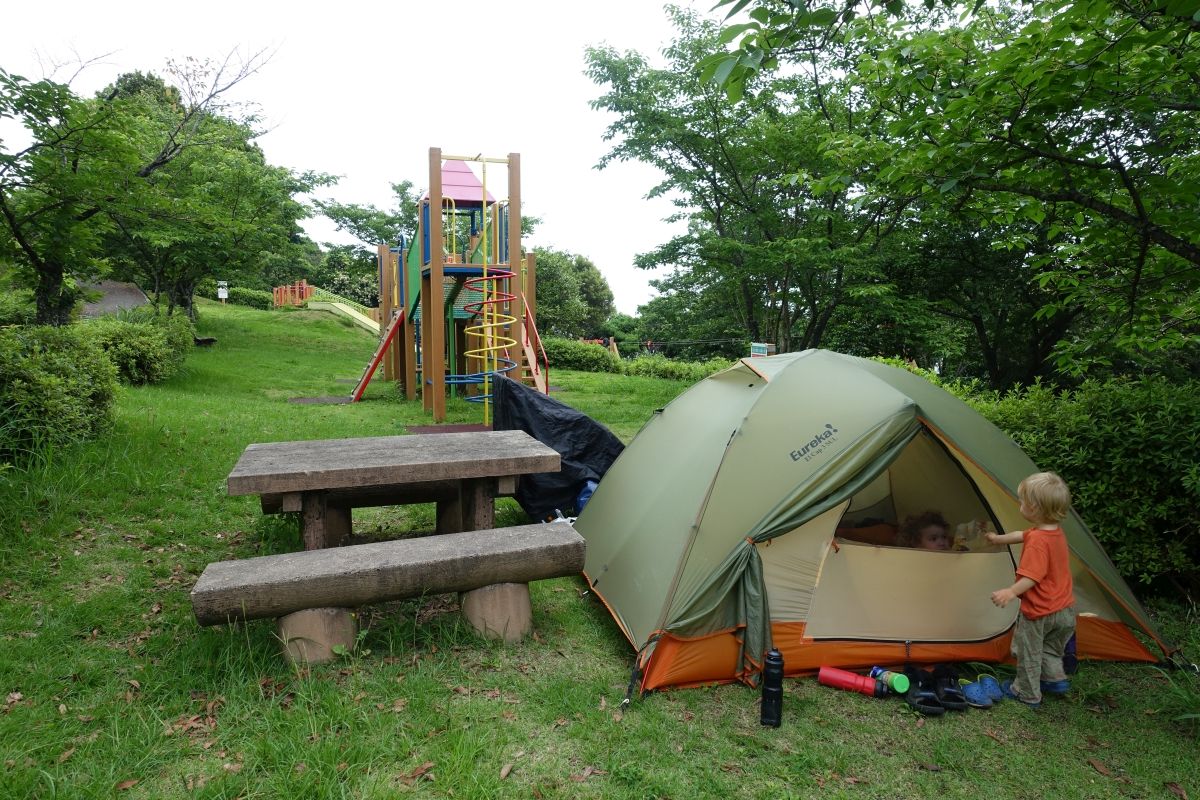 8) In Hokkaido and on larger campsites elsewhere in the country there are coin laundries including dryers. Again a blessing for longterm cyclists. 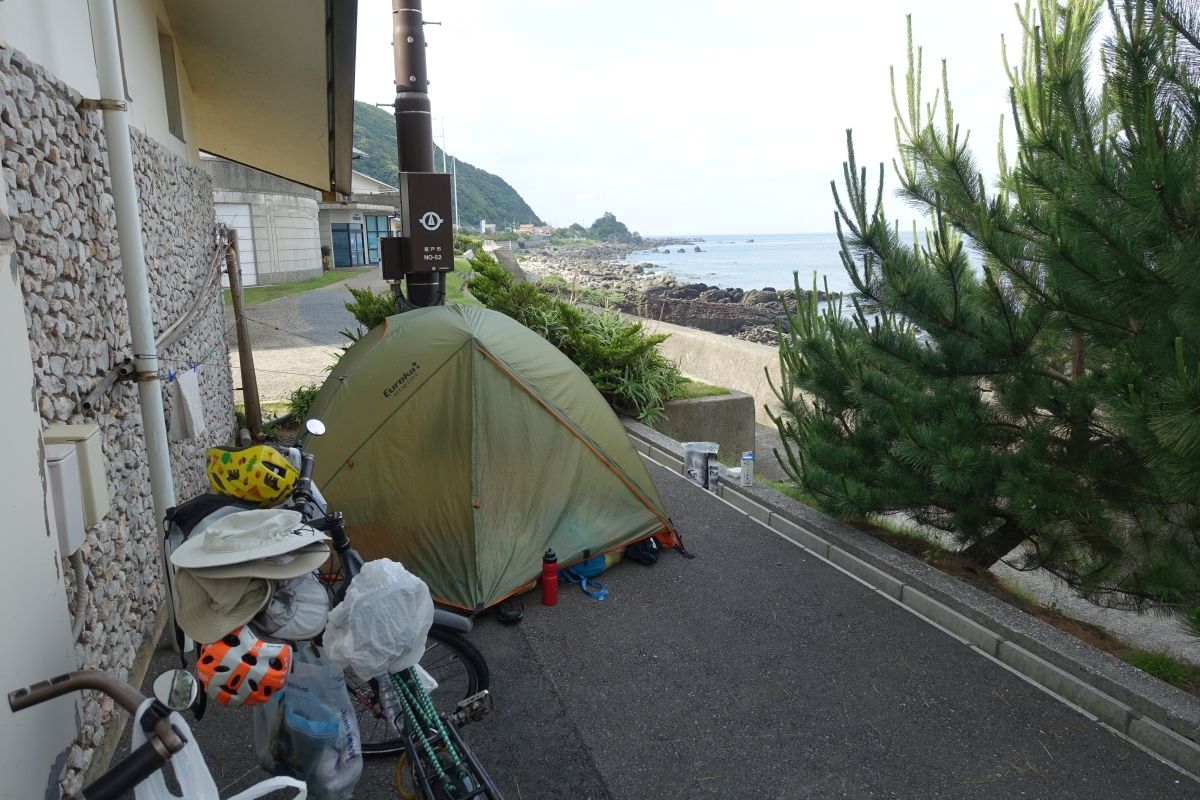 9) Campsites are busiest on weekends during summer with some visitors only coming to barbeque during the day. Often campsites outside of Hokkaido are empty or with few visitiors outside the main holiday periods. 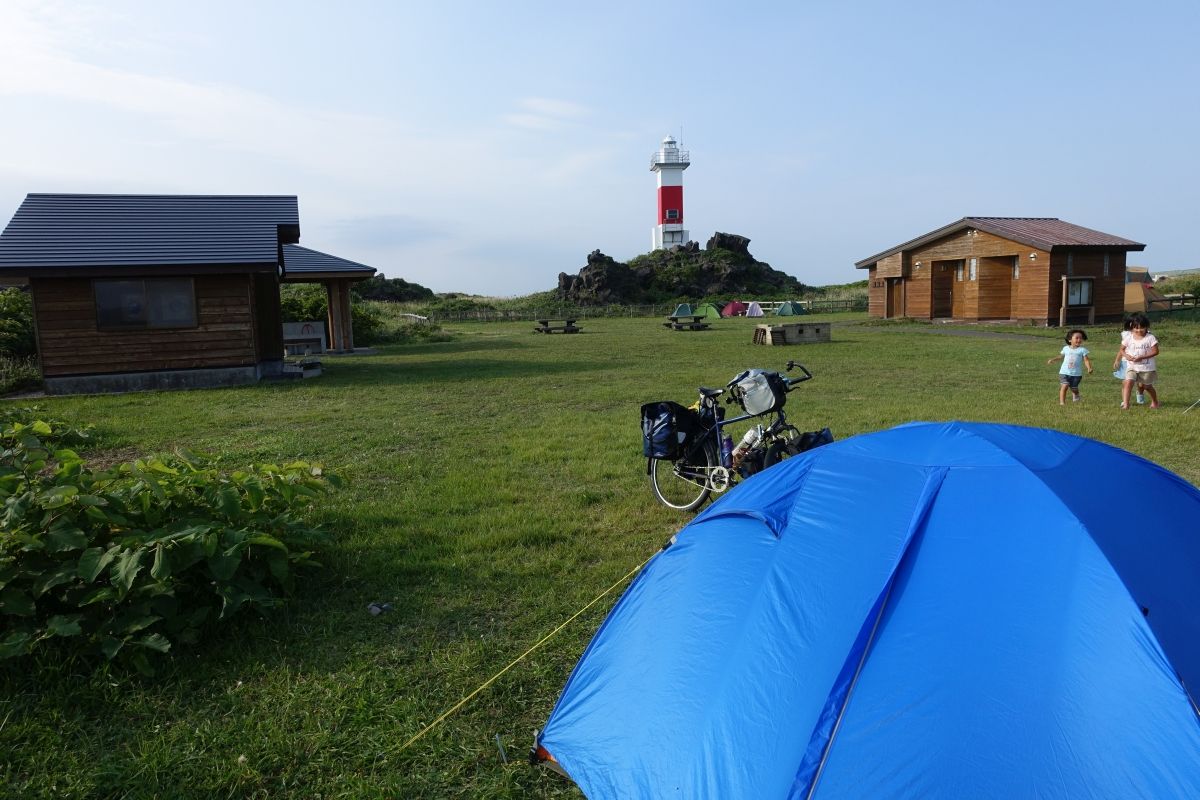 10) List of campsites we stayed at and actually remember details :-). Running drinking water is not mentioned because all sites have these