Cycling and camping during the rainy season in Japan?
Before we had left for our Tour 3 months ago, I had prepared a detailed route planning following the climate charts of the Japanese Islands, S Korea, Taiwan and New Zealand. Avoiding heat, cold but especially the rain was the hot topic. But the rainy season during June and July in Japan is difficult to avoid. In addition we are spending more time at beautiful places than originally planned, hence are not as far North as originally envisaged.
So, now, there we are:-) Although we already had many rainy days in Kansai, Shikoku, Tokyo and the Northern Alps, in “Secluded Sado” we were right in the middle of the rainy season. Hence, we had to strictly follow a 1 to 3 days ahead weather planning (often even at an hourly basis). 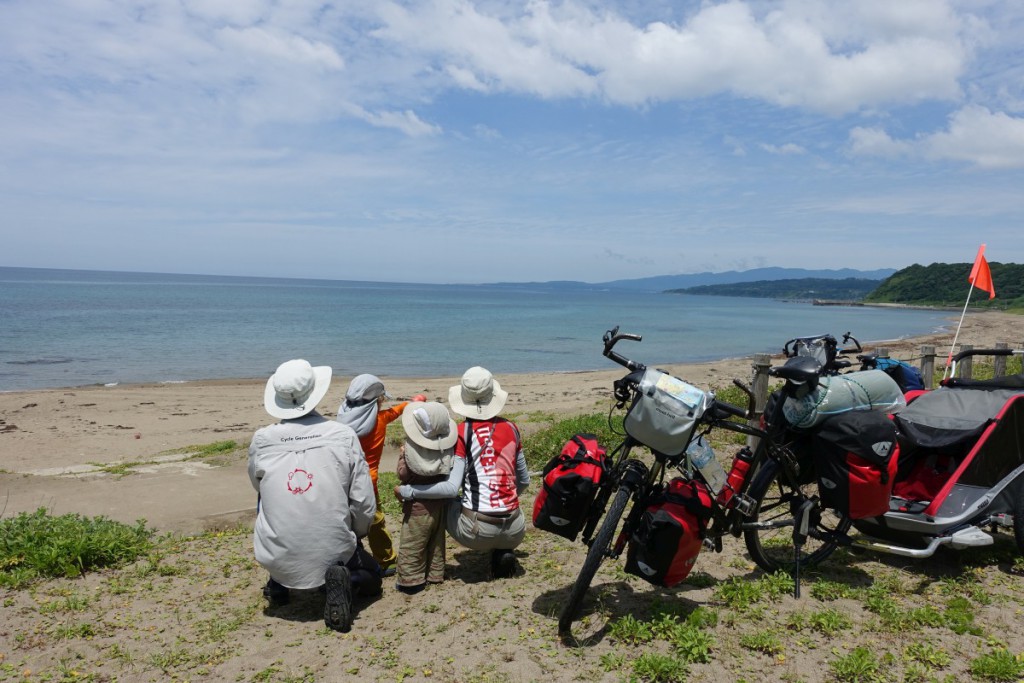 On Sado Island, Northern Honshu, that has been praised by many as beautifully remote, laid back with lots of enchanting nature, our planning has reached near perfection. The very hilly and steep (> 10%) roads around the 200 km of Sado Island as well as scarce supermarkets meant more planning than we – nor the children – especially like. Amiram – our steepness and weather master – calculated our daily km and suggested whether we should camp or stay in a local Minshuku (guesthouse). I usually take care of navigation, but that was less important on this small island. And the one damaged road, where we needed a detailed map, was not indicated anyway… 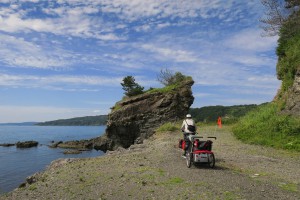 And we stocked up on food supplies as never before… Very few shops and scarce restaurants coupled with our desire to be totally independent, and out wish to stop wherever it is nice or when the children need a break, made it necessary to cycle around with an extra 10 kg….. at least…. All those steep climbs….
But we loved it! One week of very remote cycling in beautiful coastal scenery, around cliffs and rocks, on small rice paddy plateaus, tiny fishing villages, lush green mountains. We have had a lot of “lonely planet” already in Japan so far, but this really felt like it. 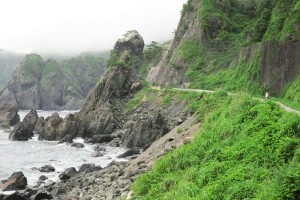 Sado is not only known for its pristine nature, but also for its original culture. The famous Kodo drummers are from here. The Earth Festival attracts international and national visitors alike. Traditional boat shaped hats, fierce looking masks, wooden bathtub like boats, etc drew our interest. 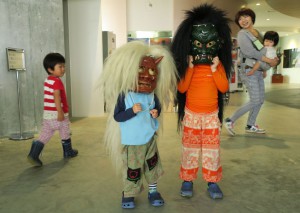 We camped at some most amazing places, often being the only ones at very remote beaches. On the Western coast, we watched in astonishment the amazing sunsets, with the sun slowly disappearing into the sea and mountains of clouds glowing colourfully in the setting sun. We often chose a slightly elevated site, that allowed for amazing views directly from the tent. One night we even found a site under a small roof, so the tent did not get so wet during the rainy night:-). 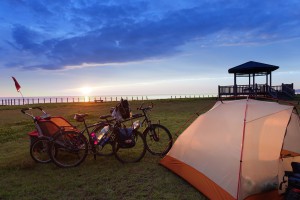 Sunset over our wild Campsite

We especially valued the kindness and hospitality of the islands inhabitants. One day our minshuku hosts invited us for a late evening dinner with Asahi beer and prepared home made rice balls for breakfast (for free), as we had not managed to stock up sufficiently on food. They even offered to drive us on the next morning to our next destination, as the rain persevered long into the late morning hours. We did not have to take the offer as the windy rain finally ceased around 11 am. On another day we received an invitation to stay with a local businessman at his 2 story industrial home. He surprised us with Classical and South American music, a German/Japanese dictionary and a breakfast with Miso soup with homegrown carrots and onions. And then there was even a local diver/ fisherman who offered us 5 of his freshly picked sea-snails together with a bag full of seaweed, that becomes natural jelly when cooked. The many sweet presents for the children not counted…. 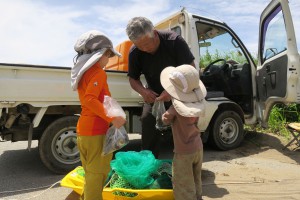 Amaya and Tayanika especially enjoyed the many “toys” on the beaches. Civilisation waste washed onshore. As well as the many toys that nature procures for free. It’s crazy (and sad) how persistent and permanent plastic is…. Tayanika still asks today, when we reach a freshly cleaned beach: “Where are the toys?”. 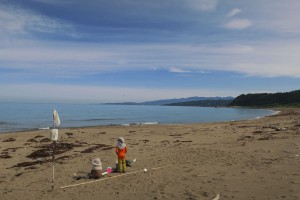