Almost 1.5 months ago we left early in the morning loaded with our backpacks towards the only bus stop near our home town Ojochal in Costa Rica. We were on our way to one of Costa Rican’s tourist highlights, the Corcovado National Park. We arrived 30min early at the bus stop, as this is what had been recommended in case the bus would arrive earlier.
A German surfer lady started chatting to me, when Amiram strangely made several steps back to keep distance to her. He relaxed when he heard that she had been touring Latin America already for 2 years and did not come straight from COVID stricten Europe. After 45 entertaining minutes we went onto the public bus, while the surfer lady decided to wait for a hitchhike. There were only 2 fellow tourists and a handful of Ticos in the bus.
The COVID crisis had already started to hit Italy badly and Trump had announced to close the borders for some European countries (Italy, France, Germany for example), that were starting to see a surge in cases. Here in Costa Rica there had been no cases so far. But Panama, our nearest neighbour and only a short drive south was becoming anxious and concerned about the situation. Amiram remained rather tense and kept using hand sanitizer on himself, the kids and I. We had considered cancelling our weekend trip to nearby Corcovado Nationalpark due to COVID but finally decided to go, because we had made downpayments and successfully secured entry tickets for the weekend after having been refused the week before as it had been fully booked for 10 days.
It was the first time we were sitting in this public bus south. I was glad we had finally attempted to take this public transport option, as Amiram and I had been researching endlessly to find reliable departure schedules for these buses for a while. Happy that we made it and did not have to go with a rental car I glimpsed out of the open window towards the Pacific beaches to the West and the cloud covered tropical mountains in the East.
When the countryside changed to flat, agricultural land, more and more passengers filled the bus until people had to stand in the aisle. Suddenly concerned, I looked around us for any coughing or sneezing person. Two elderly men were joking on the seats right next me, no sign of sickness there. Here in the tropics people rarely have a cold, and running noses are not common. I relaxed and drew my attention back to to my daughter chatting about her school here in Costa Rica and how much she loved it. In front of us my other daughter, sitting next to Amiram, was peacefully composing messages on his phone to her friends in Germany. We only learned later that Costa Rica had announced on the same morning that public transport should run at 50% capacity to reduce the risk of COVID spread. This bus was clearly exceeding 100%.
In the morning we had heard news that Panama was about to close its borders for travelers from Germany. It had caught our attention, as we needed to renew our visa in the next few weeks. Shouldn’t we be driving to the border instead of sitting in this public bus? But I pushed back these thoughts. Surely it would take them a few more days to take any drastic decisions, as had been the case in Europe. There, measures had come rather fainthearted and late compared to the more decisive actions taken in Taiwan or Singapore.
Normally after 90 days tourists have to leave Costa Rica. Long-term visitors therefore go for a border run by going to Panama or Nicaragua and coming back within the same day or a few days later to renew their visa for another 90 days. Doing this is called a border run. Panama is less than a 2 hours drive away from us, and only a little further than the Corcovado national park. With COVID approaching we had made an arrangement with our friends for the following Monday, to borrow their car and drive to the Panama border to be on the safe side and renew our visa earlier than necessary. But isn’t this already too late?, Amiram and I had asked ourselves. Hectic I composed a message to our friends if we could already have their car on Sunday, in case we would come back earlier than planned. Everything still felt so peaceful, and we continued our adventurous journey by bus, then taxi, then boat to our final destination, a secluded beach that is difficult to be accessed over land… true wilderness for us nature lovers. 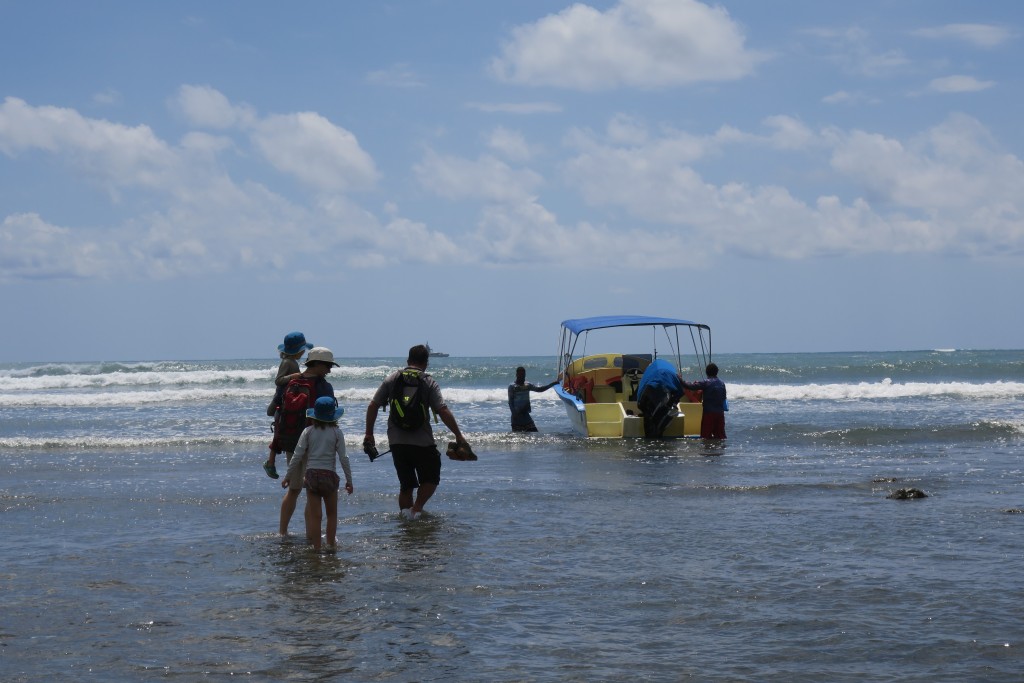 After an intriguing ride through mangroves which later turned into a bumpy journey over the breaking waves from the river mouth to the open sea, we reached Bahía Drake, a sleepy village adjacent to the Corcovado National Park. As we reached our guesthouse, we were shown by our gentle Tico host to a rather dark room with one window, 2 big beds, one portable fan and an adjacent bathroom. Chicken were scwaking in the backyard and the sound of cicadas was filling the air.
Amiram looked at me reproachful: “You did it again?”
Grinning I tried to explain:” I was late this time with booking ahead and hostel prices had soared.” Remorseful I had to admit that trying to save money in the dry season in this part of the world by not booking an air-conditioned room was like sucking on a pebble when you could have chewed a juicy a chewing gum.
Unsurprisingly the children were grumpy after the tedious travel and the super hot and stuffy room made everthing worse. Amiram had turned his attention away and was glued to the phone, checking the multiplying news about the Corona situation: “The disease is spreading faster than expected. Now even in….”
I shut my ears. Sometimes I can suddenly be very good at ignoring unwanted facts.
After the kids and Amiram had fallen into a sweaty sleep, I wanted to see the latest information with my own eyes. The more I read in the darkness of the room, the more the facts sunk in. The situation was now getting serious for us too
I started frantically searching for border run info to Nicaragua… It became clear now that within one or two days, we would have missed the easier Panama option. And I was still in the dark about whether a visa renewal could also be done in just one day at the Nicaraguan border. I would not want to waste precious time again in this rapidly changing situation. What if the government starts to impose 14 days of quarantine to incoming travelers like in other countries? What if they shut down the border completely? Stuck in Nicaragua, not the safest place on earth? What if the situation worsens in Costa Rica with civil unrest or food shortages? And with no more planes going in and out? Would it not be better to go to Singapore as it seemed a place able to handle the crisis? As Singapore permanent residents we would still be allowed to enter but would have to stay 14 days in quarantine… The hot air in the room was suffocating during the short night and my feverish dreams turned around heroic escape plans for worst-case scenarios.
The next morning I was so unrested that I wanted to leave Corcovado straight away. I was even generally questioning whether staying in Costa Rica would be the right decision. Luckily Amiram had recovered overnight from the shock. He argued that Germany at the moment wasn’t appearing a better place than Costa Rica for us. With our school community, the rental house, garden and pool, we were well placed here, at least for now. I wanted to believe him and reluctantly packed for our pre-booked day-tour into the heart of the wilderness of the nationalpark. 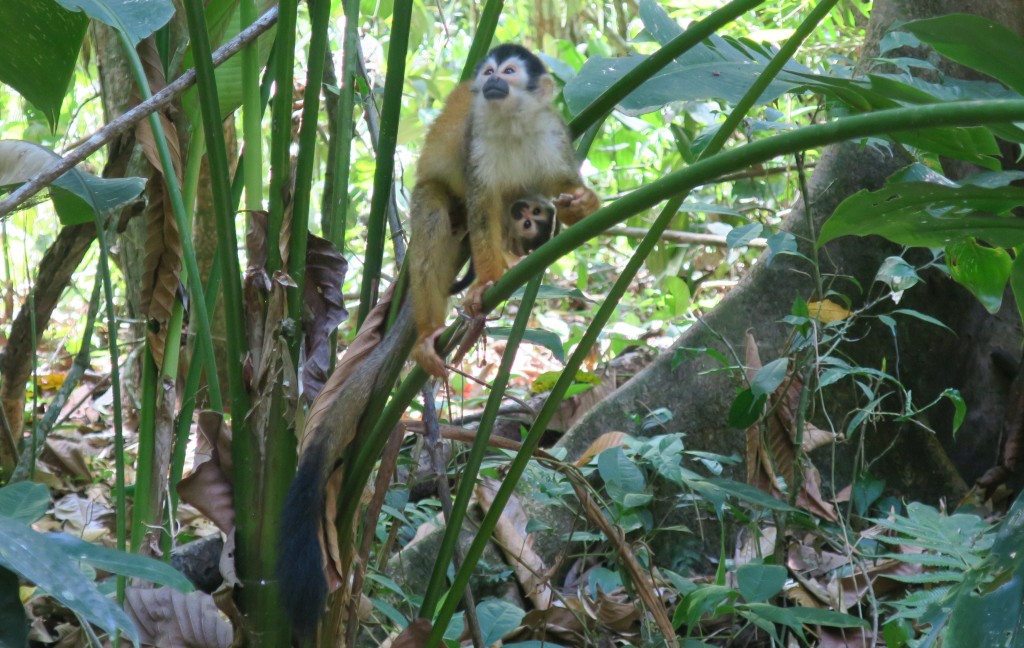 Playful monkeys, a mud covered, sleeping tapir at very close distance and many other animals cheered us up and distracted our tense minds, while we tried to keep a safe distance from the other Western tourists. Costa Rica, this amazing country with its national parks, animals and abundantly alive nature was easily succeeding in convincing me to stay.
That night Amiram and I took several emergency decisions. We booked an expensive mangrove tour back to the harbour the next day, hoping we could avoid the crowds that would go to the famous snorkeling or whale watching trips. This would also help us avoid the public transport boat. From then onward we would find a taxi driver all the way home to avoid the 1h public bus ride. We also planned to take a rental car on the next morning and drive across entire Costa Rica in a mad dash to the Nicaraguan border. We also planned to self quarantine at home after the border run and start homeschooling despite our school still being open. In Germany they were beginning to close schools as well. Utterly exhausted I fell into a deep sleep despite the oppresive heat of our small and stuffy single window room.
in 2020 / Americas / Costa Rica / Latin America 0 comments
Share