Should we stay in Costa Rica or should we go to Germany? Should we try to get on one of the flights that the German embassy was organising? If we stay should we try to extend our visa with a border run or just hope Costa Rica would not penalise expired visas?  Information about borders closures had not yet been released or was hard to come by as in the case of Nicaragua. We finally decided that we would stay in Costa Rica and would attempt a border run to Nicaragua.
The night before we went I had packed frantically, as if we would be leaving for a long time. Our endeavour was risky, as we did not know if we would be allowed to enter Nicaragua without being held in quarantine or be allowed back into Costa Rica.
Despite all this we decided to go immediately on the next day, Monday 17.3.2020. Not in the car of our friends, who had offered it for a day, but in a rental vehicle. Due to the sheer distance to the border in the far north of Costa Rica, we could not to come back within a day like when going to the Panama border. The Peñas Blancas crossing into Nicaragua is more than 550 kilometre from our home.
While Amiram was driving I  constantly checked incoming news about border closures and quarantines on the tiny screen of the mobile phone. Panama had shut the border overnight to all incoming travellers. I read rumours that Nicaragua was imposing quarantine. Then, when we had already driven more than 100km, news broke that Costa Rica was closing the border to Nicaragua as well. When exactly that would happen, was unclear. There were reports stating the border would close within 24 hours. While I tried to find reliable information, Amiram and I kept discussing all scenarios and weighing the risks. Being stuck in Nicaragua and possibly become confined there into quarantine was the worst case scenario.
However Amiram felt it was unlikely that the well organised Costa Rican Government would make such a sweeping border closure announcement on a Monday without giving people at least a day or two to react. Nicaragua however is much more unpredictable and it was extremely difficult to find any information on their intentions on border closure or quarantine.
We were racing against time. If it would have been for Amiram and me on our own we wouldn’t have worried as much, but the added responsibility for our children weighed like a rock on our shoulders.
Our oldest daughter sensed how tense we were and started begging us to turn back. We kept repeating to her, like a self-fulfilling mantra, that everything would be fine. We told Amaya that we would carefully check the situation at the border itself and would not take any unreasonable risks. We wanted to believe it ourselves.
It was a 6.5 hours drive. We stopped only once at a supermarket, hectically glancing around us to check if people were following the hygiene rules. Several times during the drive we asked ourselves quietly whether we should turn back and stay only another month, or simply overstay on our visa, instead of risking to enter Nicaragua and not be allowed back. I even tried to call the German embassy in Costa Rica, but the line was busy. Then I wrote an email to them. Although they did answer within a few hours, the response was vague and fluffy. Some of our friends told us that the Costa Rican government would have to extend visas for long-term tourists anyway as they were an important part of the economy, so we shouldn’t bother. But we didn’t want to have to rely on this goodwill. So we kept going.
Multiple children audio stories about the chirpy little dragon Coconut (“kleiner Drache Kokosnuss”) saved us and kept the kids distracted. 2 hours before reaching the border, rumours were multiplying on the Internet. But we were so close now, that we just wanted to see by ourselves.
Frantically searching on the web again I found a guesthouse with chalets along the way, offered by a Swiss couple. They were even offering day trips to Nicaragua… I immediately called the lady to find out more. She advised me in the typical calming Swiss-German accent that it should be easy for us to do the border run tonight and that afterwards we could come and rest at her peaceful place. I did not dare to hope too loudly that everything would be fine. 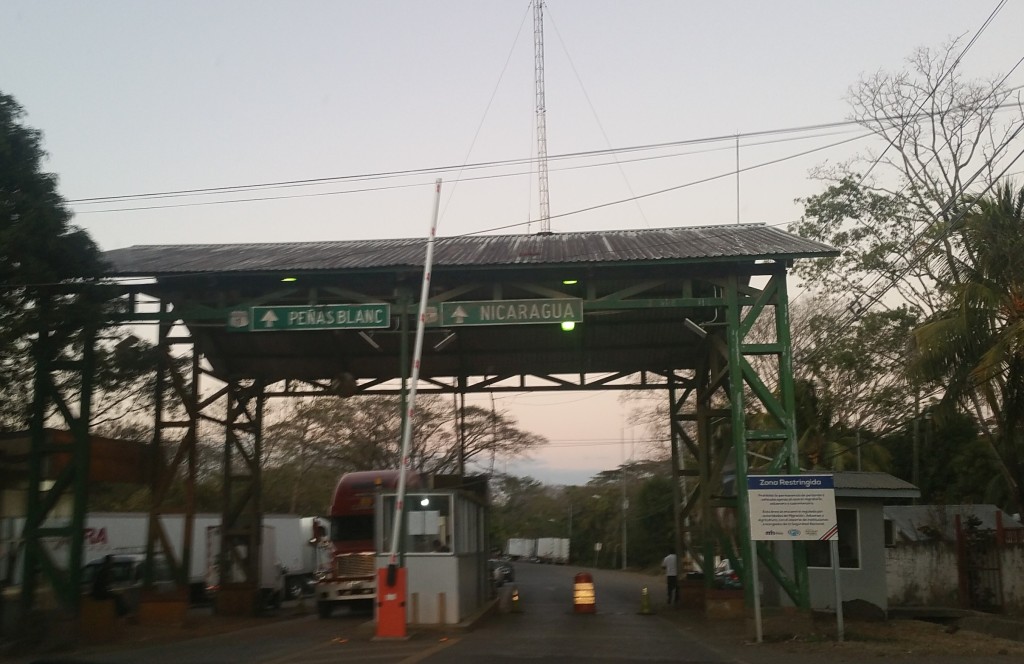 The sun was about to set, when we reached the dusty border post of Peñas Blancas. Here in this part of Costa Rica everything is so much drier than in our Pacific jungle of Ojochal. It felt like in an African Savannah. The border wasn’t very busy. We overtook a long line of trucks and stopped in front of the sign board that said “DEAR TURIST, departure tax here”.
Everything was as described on the helpful how-to guide to Nicaragua that had been posted online by other travellers. While Amiram stayed at the car negotiating with some touts about USD exchange rates, I walked to the little window in the wall paying our departure tax. Behind us were small groups of internationals with lightweight daypacks, relaxed and joking. A family of 4, an older couple and an American-Asian lady with a smile. I asked her if she was also crossing the border and would be coming back still this evening. I felt silly asking as it looked so obvious. But I wanted to hear it with my own ears to believe it. She responded positive and said it should be quick and easy and that we did not even need to take any luggage with us.
Reluctantly we left all our belongings in the rental car, checked that it was locked several times, and then headed towards the large building of the Costa Rican Exit office. Only the other Westerners were there. Our passports took a little longer to be checked because of the many pages full of immigration stamps mostly from Asia.
“Ragna, the Viking”, perplexed I looked at the officer. He grinned at me. I was so tense about saying the wrong thing, that he had to repeat the joke 3 times until I understood. Few years ago a Viking series got released featuring the main character Ragnar. A muscular, big and bold Viking. Since then I get these comments frequently as I look the total opposite. I breathed out, relaxed a bit and tried a smile.
Stamp, stamp, stamp, stamp. Ok, we were doing this now! No way back. We were officially out of Costa Rica.
I had read that we needed to walk for 1 km and over an old rusty bridge all the way to the immigration office on the Nicaraguan side. The sun had already set, it was quickly getting dark with only few street lights around. There was still one tout following us, trying to offer his services. Although the children had been walking fast and brave with us so far, the tout’s presence made them feel clearly uneasy. And probably me too, because a bit too rough I had to tell him, that we were fine on our own and would not require further assistance. He left. What a relief. 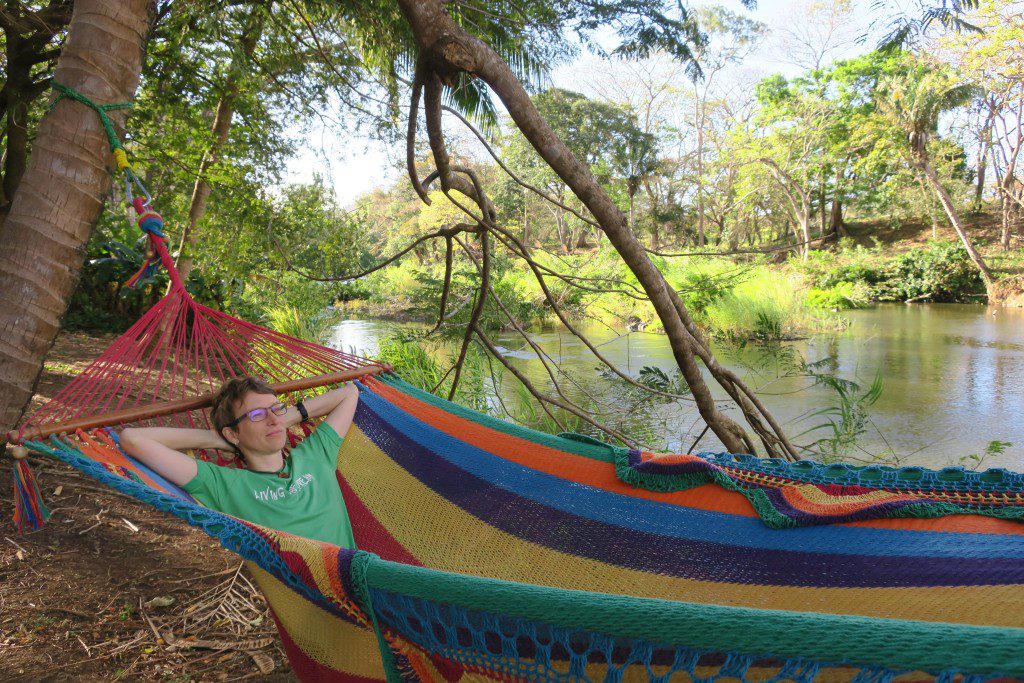