We had not met any other cycling family, until the end of the 11th month of our Zen Tour, when we met 3 families within 3 days, near or on Maria Island, north of Hobart in the South-Eastern part of Tasmania. 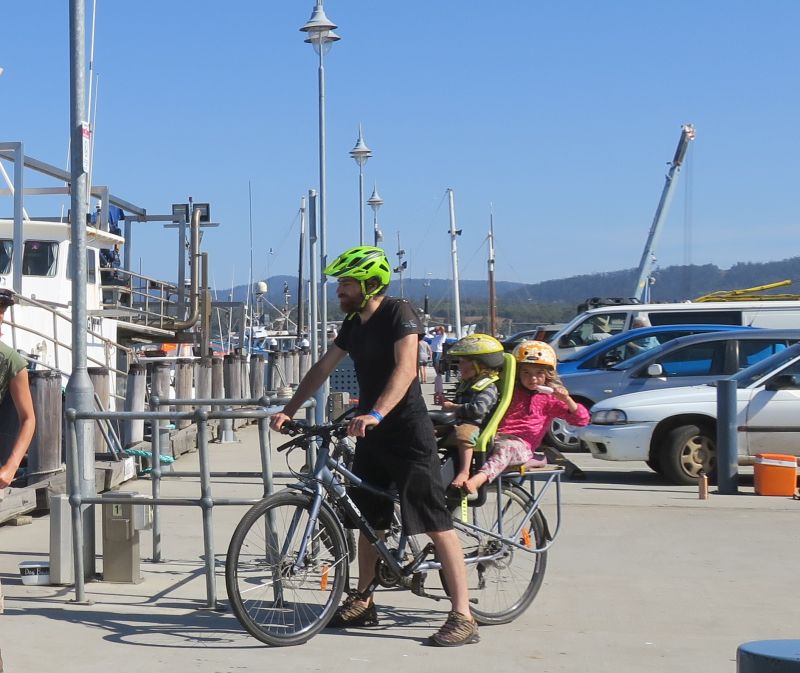 Our first encounter with a cycling family was when we got onto the ferry to car free Maria Island National Park (one island, one national park). We observed one father on a cargo Bicycle with 2 children sitting on the back rack. When boarding the small ferry we quickly started talking. The family was planning a cycle trip on several “Eurovelo’s” in Europe spring this year. Amiram and I had to admit, that we did not even know much about the Eurovelo’s, as we have not been cycle touring in Europe for a long time, having been in Asia for most of the last 5 years. Nick and Arana, who are both tour guides on the Overland track of Cradle Mountain, were very interested in our front seat solution, that we had sourced from the Netherlands. The family lives in Lorinna in the mountains of Tasmania in an alternative village, characterised by strong environmental and social communal values. 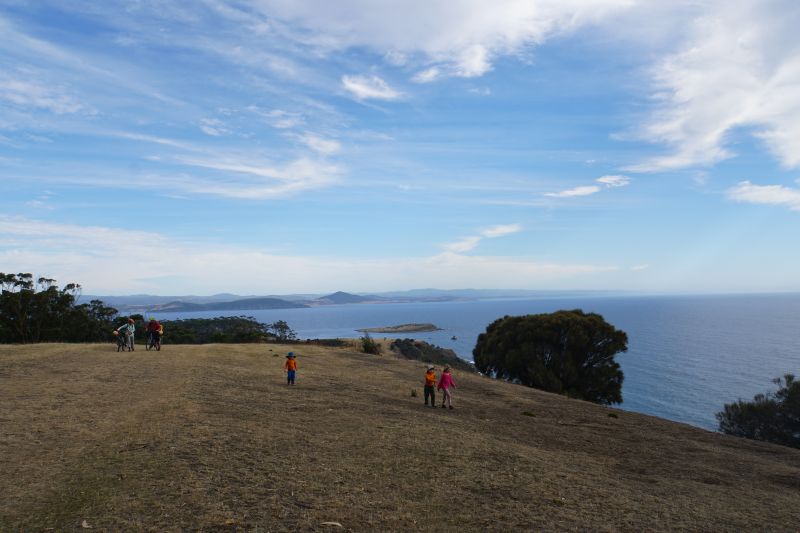 Amaya arranged, that Nick and his 6 year old daughter Minnow took us the next day on a mountain bike/hike to Bishop and Clerk Peak (600 m above sea level). It felt so good cycling with other parents, who bring their young children on such tours. It was quite a climb up with the bikes. After a while the children had to walk/run by themselves, while we kept riding, as the track got pretty steep and slippery. Luckily Amaya and Minnow had become friends and together they hiked and climbed up all the way to the Peak! Amaya was so busy playing with Minnow, she forgot to complain… Together with Tayanika, they picked berries from the native berry trees. The red berries were  tiny, but very sweet. Tayanika then decided to take a nap in the Child Carrier on my back on the way up. I could feel my sore legs still 2 days later from coming down the steep path due to the heavy child backpack. Cycle muscles are very different to hiking muscles:-) 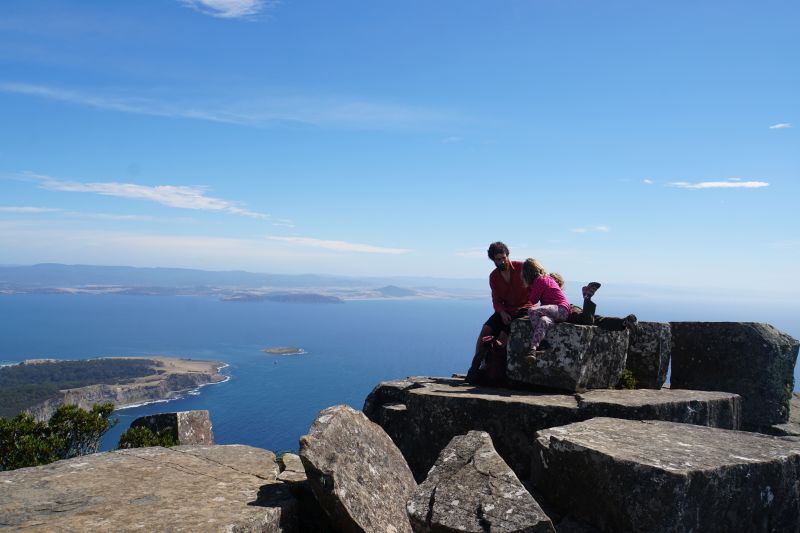 Maria Island has been one of our highlights on the whole tour in Australia /Tasmania, not only because of our bicycle family friends, but also due to its amazing wildlife. Wombats were grazing during the day near our tents. We have not had these rather shy animals so close yet. Of course there were wallabies and pademelons (smaller even then wallabies and like other small marsupials indigenous to Tasmania)…. 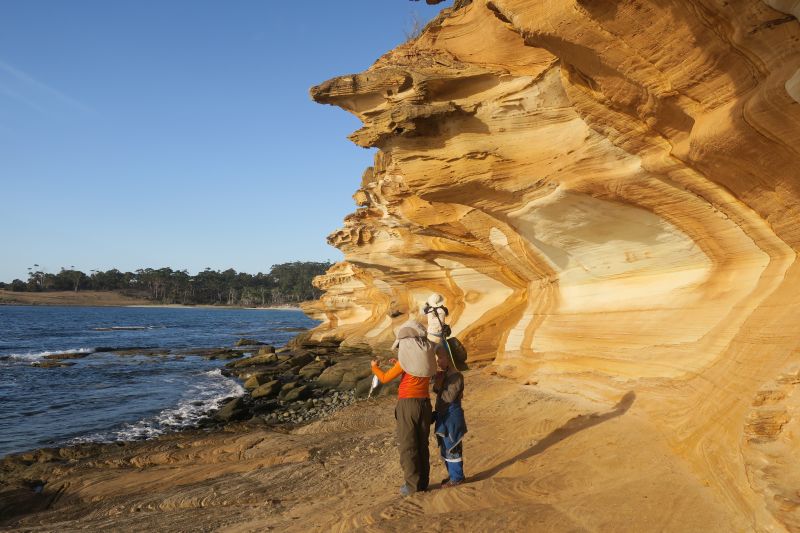 But the biggest hit was Tasmanian Devil spotting around sunset! I got so excited when I saw my first wild Tasmanian Devil hobbling around near the camp kitchen, that I almost fell over the many children around. They too were so excited that I had a hard time explaining them, that only by remaining quiet, the nocturnal animals would come back. My camera in my hand and my headlight ready I made sure that I always hang around the campkitchen in the early evenings during all 3 nights that we stayed on this amazing and beautiful island. This is one of the very few places in Tasmania, where one can see a wild Devil without the lethal mouth cancer that has depleted most of the endemic Tasmanian Devil population. There were 2 young, but already independent animals (ca 1 year old) and one mature Tasmanian Devil that we spotted. Tayanika and I named them “Hobble Wobble”, due to their funny, slow, galloping way of moving about. They certainly did not seem very fast, explaining their rather scavenging and not hunting behaviour. With a lot of foresight this national park that campsite had provided us with metal bins for our food and rubbish, enabling me a peaceful night without Devil and Possum nightmares 😉

We could not believe our eyes (Amiram spotted them first), when on the next day another cycling family arrived on the island. They had chosen the Pino/Hase Bike solution, that we already have in mind for future trips…. Urs and Lisa, a sino-swiss couple were riding with their 3 and 5.5 year old boys around for 3 months on their tandems. Sven and Jan can pedal with their parents or sleep comfortably on the reclined seat, protected by a wind/rain cover. 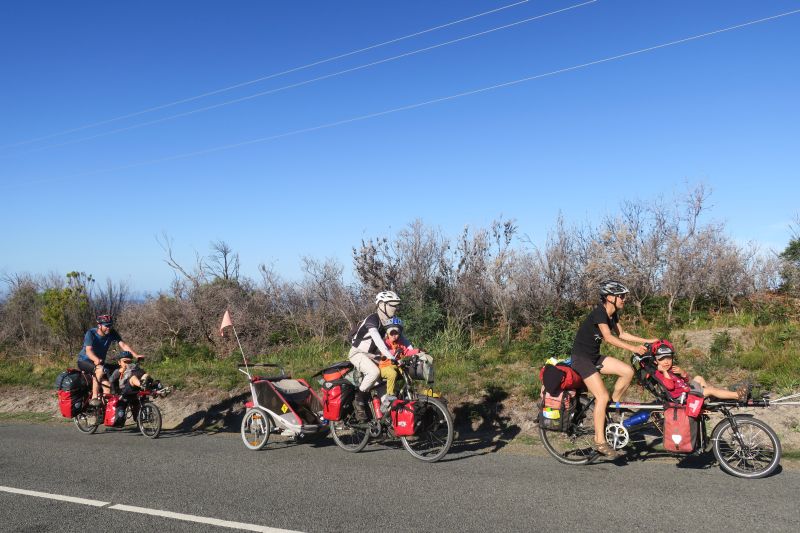 Again the children made friends quickly, despite having a “real” language in common. Amaya changed to Swiss German pronunciation already after 2 days, which made it easier:-) She started rolling her r’s and changed intonations of words. She and Tayanika enjoyed especially using the word “schiessen”, which in Swiss German means “throwing sth’, but in German means ‘shooting’, which we usually discourage (trying to raise rather peaceful children). Thinking about it a few weeks later, I can still hear their mischievous laughter and happy eyes directed at me while they were throwing sticks over the cliffs and shouting “Stoecke schiessen”…. 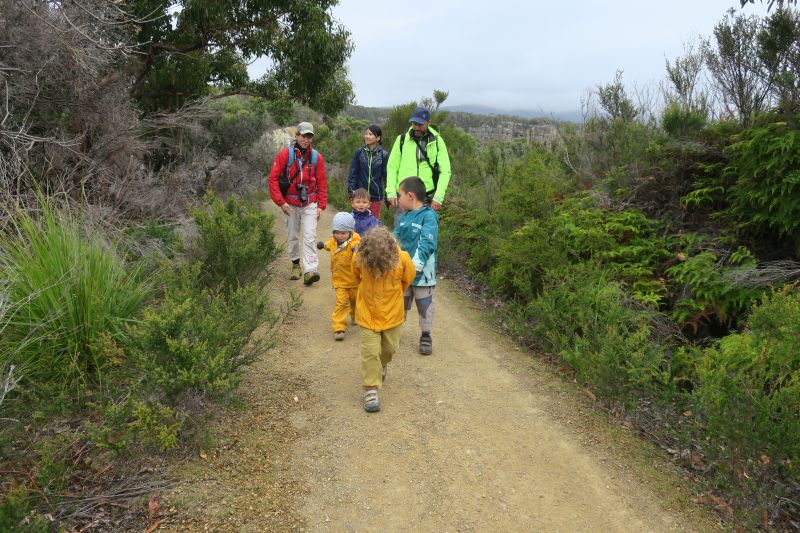 We ended up cycling the same stretches and met for lunch and overnights. Again the children were very happy and the question “when will we meet with them again?” sounded very often. We decided not to cycle together, due to the many wee-wee stops of the kids and the ‘changing clothes’ stops of the parents (rain, hot, windy)… but usually ended up at the same shops for supplies (especially fresh food) anyway.
We exchanged many cycle stories (some in similar exotic places), before and with the kids and discovered a few common friends from within the solar and cycle community. And shared our stories of the hardships of keeping children entertained while being on a cycle tour 🙂 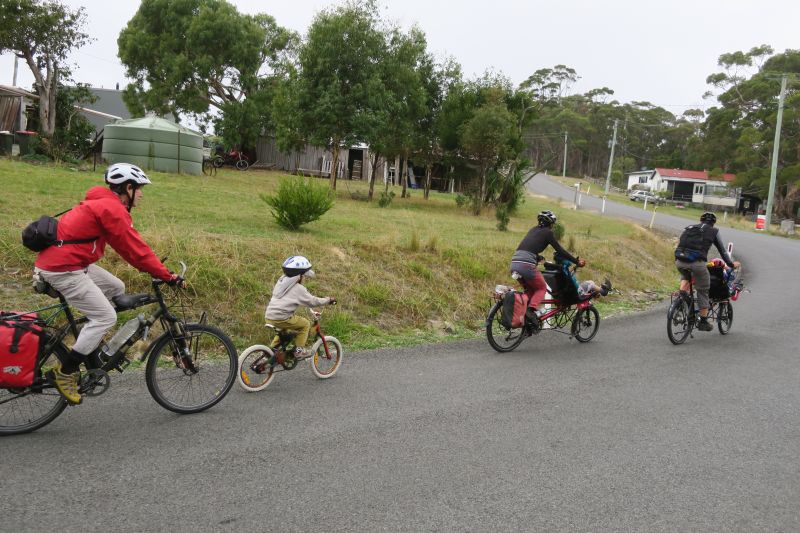 Day tour
The amazement was big again, when we reached one of our Warmshowers hosts just before the Tasman Peninsula, and another cycle family with trailer arrived. “Here your new friend! His name is Fraser” was the introduction. Amaya and Tayanika were happy. The Scottish/ English couple who lives in Dunedin / New Zealand since a decade had just started their Tour de Tasmania. We looked a bit envious at their comparatively little luggage, they only had back bags (no front bags), the weight of only 1 child and definitely a lot less food and water. They had chosen for this trip not to camp but use the Warmshower and Air BnB network. Hence save weight…. 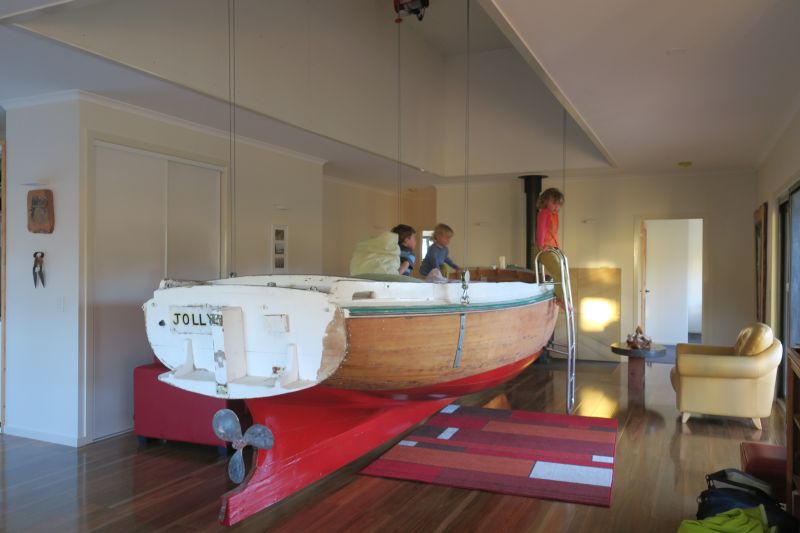 There were a few more moments of amazement during this evening. As there was only one room for guests, our host Brett showed us the 2nd option for spending the night. With a loud engine sound, he let a large boat ca 20 metres down from the ceiling. I could not believe my eyes. Inside was a queen mattress and blankets and lots of space for 2 more sleeping mattresses for the children. “This will keep the children busy for a while ” said Brett, who is owning a construction business. And he was right. The 3 children had immediately climbed up the ladder and were happily playing in and outside of the hanging boat (outside was the ocean, so they had to swim of course). Taking turns of being the captain, 1st and 2nd mate. Tayanika loved being the captain of course. When I later climbed aboard to sleep, I felt the boat move and immediately remembered some of our night ferry trips in Japan and Korea. Not all of them were pleasant, due to high waves…. But it quickly settled down and we had a very nice sleep. 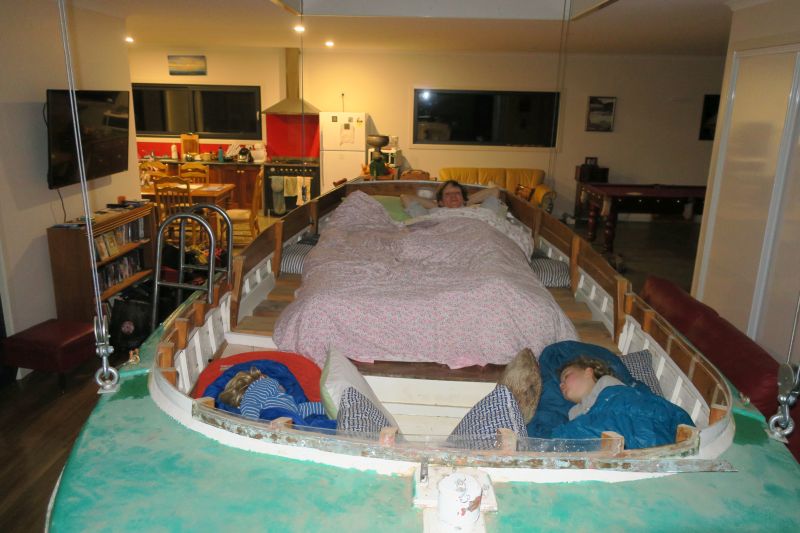 Good Night in a boat

Over the next couple of 2 weeks, we kept hearing from our cycling family friends via other people, who had met or seen them along their travel journeys or hosted them. Cycling with kids never felt so normal! 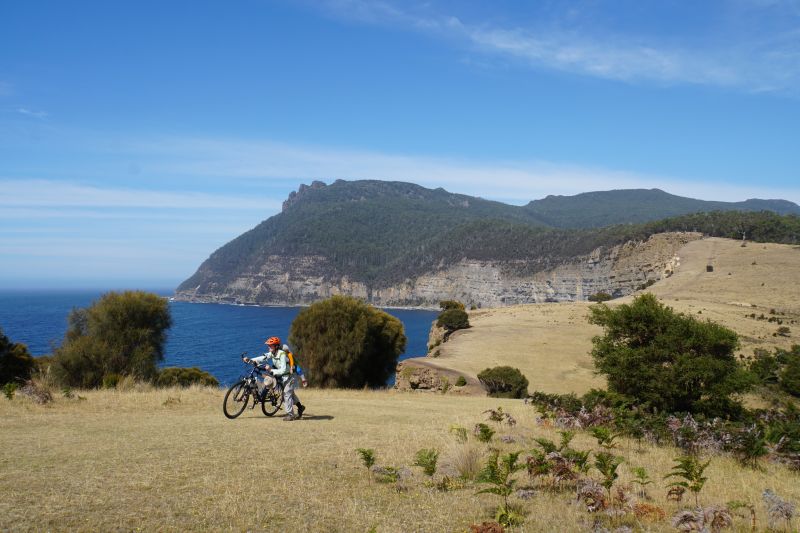